The Supreme Court’s 2014 decision in Alice Corp. v. CLS Bank International cast doubt over the eligibility of software-related patents.  However, recent cases have given reason for optimism for their eligibility.  In particular, Packet Intelligence v. NetScout found a disputed software claim patent-eligible on July 14, 2020.  The parties stipulated that Claim 19 of ’789 patent was representative for purposes of their litigation. NetScout asserted that Packet Intelligence’s Claim 19 was directed to section 101 patent-ineligible subject matter.  Claim 19 is as follows: 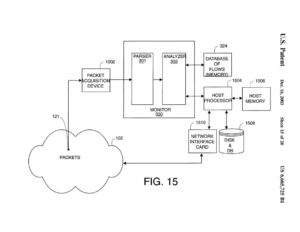 “A packet monitor for examining packets passing through a connection point on a computer network, each packet conforming to one or more protocols, the monitor comprising:

(b) an input buffer memory coupled to and configured to accept a packet from the packet acquisition device;

(d) a memory for storing a database comprising none or more flow-entries for previously encountered conversational flows, each flow-entry identified by identifying information stored in the flow-entry;

(e) a lookup engine coupled to the output of the parser subsystem and to the flow-entry memory and configured to lookup whether the particular packet whose parser record is output by the parser subsystem has a matching flow-entry, the looking up using at least some of the selected packet portions and determining if the packet is of an existing flow; and

“…court rejected NetScout’s argument that claim 19 is directed to the collection, comparison, and classification of information. The court instead held that the claim was directed to “solving a discrete technical problem: relating disjointed connection flows to each other.” Id. slip. op. at 30.

In conclusion, Packet Intelligence v. NetScout Systems Inc. provides an additional precedent that a software-related patent may survive a section 101 eligibility analysis.  Claim 19 was not directed to an abstract idea and could be considered a “technological solution to a technical problem”.  In arriving at this conclusion, the Court did not restrict their analysis only to claim language but supplemented their analysis with consideration of the patent’s specification.